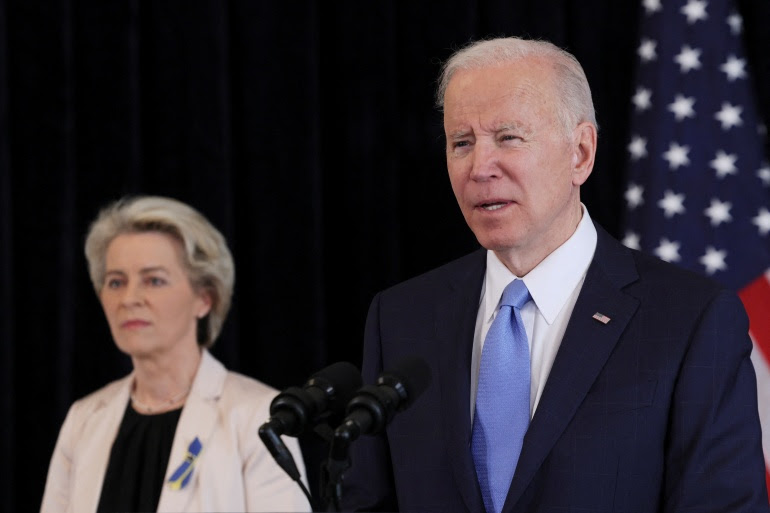 No American President ever travels to Europe without a bag full of so-called “deliverables” and US President Joe Biden duly arrived in Brussels last month for NATO, EU and G-7 Summits with a long list of new sanctions and related economic measures.  These new US sanctions, however, are unlikely to have a major impact on Russia’s economy because they were for the most part an expansion and deepening of similar sanctions announced in the first weeks after the Russian invasion of Ukraine began.

For the Biden trip, the US announced on March 24 that it was “designating” (asset freezes and transaction/travel bans) what it called “key enablers” of the invasion. This included dozens of Russian defense companies, 328 members of the Russian State Duma, and the head of Russia’s largest financial institution. The full list here:  U.S. Treasury Sanctions Russia’s Defense-Industrial Base, the Russian Duma and Its Members, and Sberbank CEO | U.S. Department of the Treasury

After Biden returned home via a stop in Warsaw, Poland, the United States designated on March 31 an additional 21 entities and 13 individuals primarily involved in sanctions evasion networks to procure western technology. The Biden administration imposed another set of sanctions April 6 on two Russian banking institutions — Sberbank and Alfa Bank — as well as individuals, which included Russian President Putin’s adult daughters. These new sanctions followed reports of Russian atrocities in the city of Bucha, near Kyiv. New sanctions were announced on April 7 focusing on Russian shipyards focusing on naval vessel production and repairs.

Reinforcing allied unity in the face of the Russian invasion was a critical trip objective for President Biden. Accordingly, showing the world how well the US and EU were coordinating sanctions and energy strategies was at the top of the agenda for all leaders involved.  Seen from this perspective the Biden Brussels stop was only partially successful since no new EU sanctions emerged.

For its part in this show of allied unity, the EU focused on energy measures instead of invoking a new round of sanctions.  Both the US and EU announced a “partnership” and the establishment of a high-profile taskforce that would work to reduce the EU’s reliance on Russian fossil fuels, but a number of European countries, including Germany, continue to remain reluctant to announce drastic measures against Russia’s energy exports for fear of exacerbating existing supply disturbances which appear to be deepening.  This so-called “joint game plan” will increase US LNG deliveries to the EU by 15 billion cubic meters (bcum) this year.

In addition, both sides agreed to remove regulatory hurdles to infrastructure improvements needed on both sides of the Atlantic to enable already-strained US exporters to “surge” LNG and other deliveries to the EU and reduce a significant part of the bloc’s Russian energy dependency, but clearly not to immediately replace the entire 41% of the bloc’s gas imports which originate from Russia.

The EU had agreed earlier this year to drastically shift its energy purchases away from Russia over the long term in response to the Ukraine invasion and purchasing more US-origin LNG was a major element of that strategy, along with expanding renewable energy production at home.

The EU finally approved its fifth package of Russia sanctions, some of which impact energy imports, including a ban on new coal import contracts. However, major member states resisted and then severely watered down some of these measures, openly showing Moscow the EU may be close to reaching its pain threshold. Ultimately, EU energy imports from Russia remain the biggest source of hard currency that is cushioning if not directly funding Moscow’s invasion of Ukraine, especially with the large percentage of foreign currency reserves Russia had held abroad currently frozen by sanctions.

Moscow denied President Biden perhaps his most important Brussels talking point by narrowly averting default on March 17 by making the required coupon payments in dollars on $117 million in maturing debt.  However, the next challenge for Moscow is now upon us with $2.2 billion that came due on April 4.  None of this debt may be paid to creditors in rubles, according to observers who have seen these contracts (note: some contracts do allow small ruble payments).

Russia’s Finance Ministry took two interesting steps at the end of March. Initially, it issued a note saying full repayment of the maturing debt would be made in dollars. It tendered an offer to all investors to repay their foreign currency-denominated bonds in rubles at the March 31 exchange rate. It turns out a large number of domestic Russian investors actually accepted this offer, almost reaching the $1.45 billion level.  There had been other indications that Russia could be preparing to make the scheduled payment, the most important being that paying agents and clearinghouse banks continued to make small payments on other debt instruments as they came due through the end of March.

Creditors remain divided on whether the payment will be made for several reasons.  First, of course, is the size of the payment which was more than ten times the March 17 payment amount. The second issue is technical feasibility. The Treasury Department’s Office of Foreign Assets Control (OFAC) clarified that such debt repayments would be allowed using funds OFAC has frozen, but only until May 25. However, this clarification turned out to be short lived.

Thus, the April 4 payment, if ultimately not made, would be more of a political signal to demonstrate Russian defiance (behavior not uncommon under other sanctions programs) than a true economic stress data point.

The US Treasury Department changed policy unexpectedly issuing new guidance to further complicate Russia’s use of US financial institutions, but not to completely block all transactions. The Treasury Department’s main talking point on the new policy is “The US Treasury will not permit any dollar debt payments to be made from Russian government accounts at US financial institutions.” The financial press is speculating that Russia will need to use all of the 30-day grace period to find new mechanisms to route the required payments in order to avert formal default. Few channels remain and the Treasury Department has been very aggressive in telling US correspondent banks for the Russians not to process payments. The intention of the Treasury Department is clearly to force Russia to tap its other dollar reserves, not those currently frozen in the US, or to draw down on earnings from exports, in order to service upcoming dollar payments.

On a related note, S&P Global last week cut Russia’s credit rating to “CC,” which is defined as “default imminent with little prospect for recovery.” It followed that up April 11 noting Russia was already in a so-called “selective default” status, meaning certain debt payments were late but the country still had the 30-day grace period to complete before an official default would be declared. Four years ago, the agency awarded Russia an investment-grade “BBB-” rating.

The default question is a separate issue from the ongoing tussle over whether Russia will cease accepting payment for its EU energy sales in dollars or euros and demand rubles as payment.  Both the EU and Russia have staked out hard-line positions, but a compromise mechanism was in the works whereby the energy buyers transmit their normal hard currency payments which Russia then coverts to rubles internally.

At the beginning of April, Gazprombank officials issued new ruble payment instructions while other senior Russian officials indicated that ruble payments for gas could be made in several weeks or even later, so Moscow’s latest demands are not something that will result in energy exports stopping immediately.