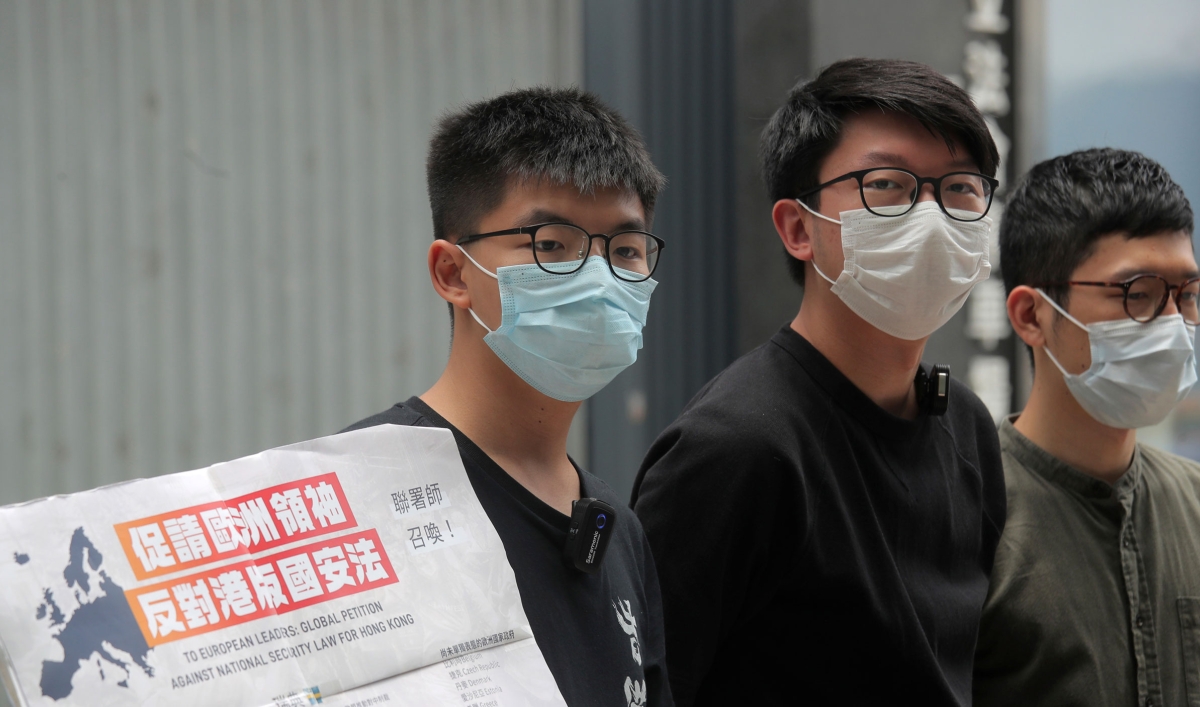 When activist and politician Sunny Cheung left Hong Kong and moved to the United States two years ago, he thought he would be free.

Now 29, Cheung had taken part in the 2014 Umbrella Revolution in Hong Kong, a movement to demand more transparent elections. In 2020, he decided to run for office, representing the opposition Pro-Democracy party, and won a primary election that summer.

But that got him in trouble.

“I was scared of China’s National Security Police. … They arrested everyone who participated in the election.”

“I was scared of China’s National Security Police,” he said. “They arrested everyone who participated in the election.”

That summer, China had introduced a controversial national security law in Hong Kong, making it easier to go after pro-democracy activists. Critics say the law violates the “one country, two systems” principle shared between China and Hong Kong.

Related: In Hong Kong, lighting a candle for Tiananmen victims is now a crime

Cheung managed to flee to the US, but his troubles followed him there with ongoing threats. The US Department of Justice has accused the Chinese government of harassing and spying on dissidents living in the United States.

In September of 2020, Cheung joined the Hong Kong Democracy Council, a nonprofit organization based in Washington, DC, where he continues his activism.

Cheung said he constantly gets threatening messages on social media from suspicious accounts.

“They look like fake accounts, and they say they would try to kill me if I continue to do my activism in the US. That is alarming,” he said. “They want you to know that they are here.”

Related: The problem with offers of citizenship to those fleeing Hong Kong

Cheung said his parents in Hong Kong also get threats.

“The Beijing government is using a lot of surveillance technology to intercept messages or signals, you know, put my parents in danger. Because if the authorities know that they have been contacting me, then they will be in danger. So, I lost communication with my parents.”

Cheung said he has caught people taking pictures of him at protests in Washington, DC, and suspects he is being followed.

The World was not able to independently verify these claims.

The Chinese government has “an organized system of espionage around the world,” according to Mark Clifford, president of the Committee for Freedom in Hong Kong, and the author of “Today Hong Kong, Tomorrow The World.”

“The Chinese Communist Party works abroad through underground organizations. … It’s secret, but it has aboveground allies, seemingly very innocent associations that bring people in to do their bidding without necessarily knowing what they’re doing.”

“The Chinese Communist Party works abroad through underground organizations,” he said. “It’s secret, but it has aboveground allies, seemingly very innocent associations that bring people in to do their bidding without necessarily knowing what they’re doing,” he said.

“We will defend the rights of Americans and those who come to live and work and study in the United States,” he said in a press conference on March 16. “We will not allow any foreign government to deny them the freedom of speech or the protection of our laws, or to threaten their safety or the safety of their families.”

A lot of the harassment happens online, said Lhadon Tethong, an activist with the Tibet Action Institute in Boston.

She has been trying to educate Tibet immigrants on how to protect themselves against cyberespionage.

“Chinese agents perform online digital attacks,” Tethong said. “They try to get people to click on malware by sending phishing emails. Oftentimes, you click on a particular attachment and don’t realize that it will infect your computer with software that allows them to hear what you’re saying, to see what you’re doing, to take your files.”

Tethong said that she is very happy that the US government is paying attention to this kind of repression.

“If everyone is scared away from political organizing and activity in the free world, then China is proving to be really successful not just in its occupation of Tibet, but in its crushing of our right to even tell the world what’s happening.”

Clifford said that US law enforcement officials should be careful to avoid racial profiling when prosecuting cases of transnational repression.

“The issue of violence against Asians, particularly since COVID[-19] started, is very real. So, it’s really tough to balance because we don’t want to be imagining that every Chinese person is somehow engaged in wrongdoing.”

Clifford said democratic nations are waking up to threats from authoritarian governments.

The US Department of Justice mentioned that Belarus, Egypt, Iran and Russia have also engaged in transnational repression.

Since March, they have been investigating three cases, and all suspects are accused of working for China’s state security.