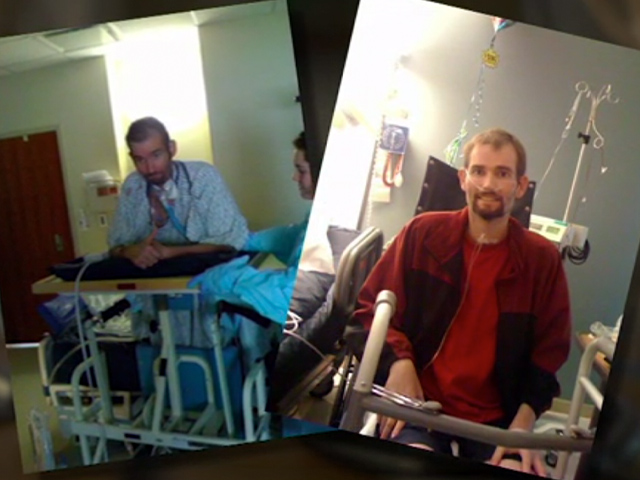 When Mark Nelson coded on an Easter weekend more than a decade ago, his whole life flashed before him. He heard blood-curdling screams and felt kicks and punches, and then something happened that’s nothing short of a miracle.

“I was scared to death that my life was over. And there was no turning back,” he recalls.

It was February 28, 2008, when Mark was admitted into a Tallahassee, Florida hospital with double pneumonia. But that wasn’t the worst news he’d get.

Now in ICU, Mark began to reflect on his childhood and the decisions he’d made in life. Growing up in a church-going, middle-class family, he had almost everything he needed except the attention and affection of his dad.

Mark recalls, “I was looking for that connection to a male figure that could give me some affirmation that I was doing something right.”

He did find a father figure – his youth pastor at church. At 13, Mark was doing his best to stand out and be admired. Mark’s mom says, “He did get kind of like arrogant, you know, to some extent, proud.” And Mark remembers, “I would actually tell other people that I knew more than them, that I was better than them, that God loved me more than them.”

Seeing the strife and division Mark was causing, his youth pastor pulled him aside and chastised him. Mark recalls, “I thought he was rebuking me as a person, and so when I left that youth group that night, I was weeping and just hurt, deeply hurt.”

Now, instead of spending all his time at church, Mark found another crowd. He started drinking and doing drugs. Then he got into pornography.

Mark recalls, “I had to find other things to really fill that wound. My entire mind was overrun with perverse thoughts. It led me into a very broken world.” A broken world that led to a growing attraction to men.

Throughout high school Mark kept his same-sex desires hidden, but in college, he started testing the waters and found acceptance among the homosexual community.  Then, after he graduated from college in 2000, he stepped fully into the gay lifestyle. Mark says, “I was getting a lot of male affirmation. I was really, really promiscuous, all over the place.”

For 7 years he kept his secret from his parents and co-workers. Then in February of 2008, after several months of being sick, he landed in the hospital with double pneumonia… and AIDS.

“I had a lot of fear about what was gonna happen to me,” he says. Doctors decided to put Mark into a coma to help his body rest. Meanwhile, Mark’s parents got word and came as soon as they could. They discovered their son was not only in a physical battle but a spiritual one.

Mark’s mom recalls, “When we went into his room that night, and we went over next to him to pray for him, I heard this voice say, ‘We have him, stay away from him’.”

Doctors gave Mark’s parents little hope, as his health continued to decline. Mark’s dad says, “I knew the Lord did miracles, you know, and we started praying right away.” His mom remembers, “I was reading the Bible all the time, and every place I went, I wrote the scriptures down that God gave me. And then I would say them out loud, and I would proclaim them.”

For the next several weeks, family and friends prayed around the clock. Then, on Easter weekend, Mark coded.

Mark’s spirit left his body. “I started seeing scenes of my life, just flashing before my eyes. And I knew that they were all based off my years of living in homosexuality. It went complete darkness again. And slowly I started hearing these screams and cries for help. And then I started feeling these kicks and these punches, these physical blows to my body. And it was overwhelming me, and I got to the point where I couldn’t really take it anymore. And I cried out, ‘Jesus!’ And immediately my soul reentered my body. I just thanked God that day with such depth for what He brought me out of.”

After Mark stabilized, doctors decided to bring him out of his coma. The next day, everyone could see that something had changed.

Mark’s mom recalls, “There was a different atmosphere in the room. Every improvement was like a time to rejoice.”

Mark remembers, “My same-sex attraction left me that night in the hospital. The afternoon of Easter Sunday I started getting stronger. I was becoming less and less dependent on oxygen. So, they saw that my lungs were getting stronger.” In fact, by the time doctors released Mark a few weeks later, they said his HIV was “undetectable”.

Mark recalls, “I just started weeping and crying out to the Lord. And just saying, ‘Lord, I’m sorry. I’m sorry for all that I’ve done. I want to be in full relationship with you, Lord’. And I just felt this peace come over me and I felt at that moment that that was it.”

Mark has since married and works for a missions organization in Florida. His HIV is still undetectable and has been ever since that Easter Sunday so many years ago.

“It is a day of remembrance, it is a day of exclamation and joy, and thankfulness for Him bringing us out of so much,” he says. “And the cross is there for anyone. Anyone. It doesn’t matter what kind of sin it is. The cross is where you lay it.”