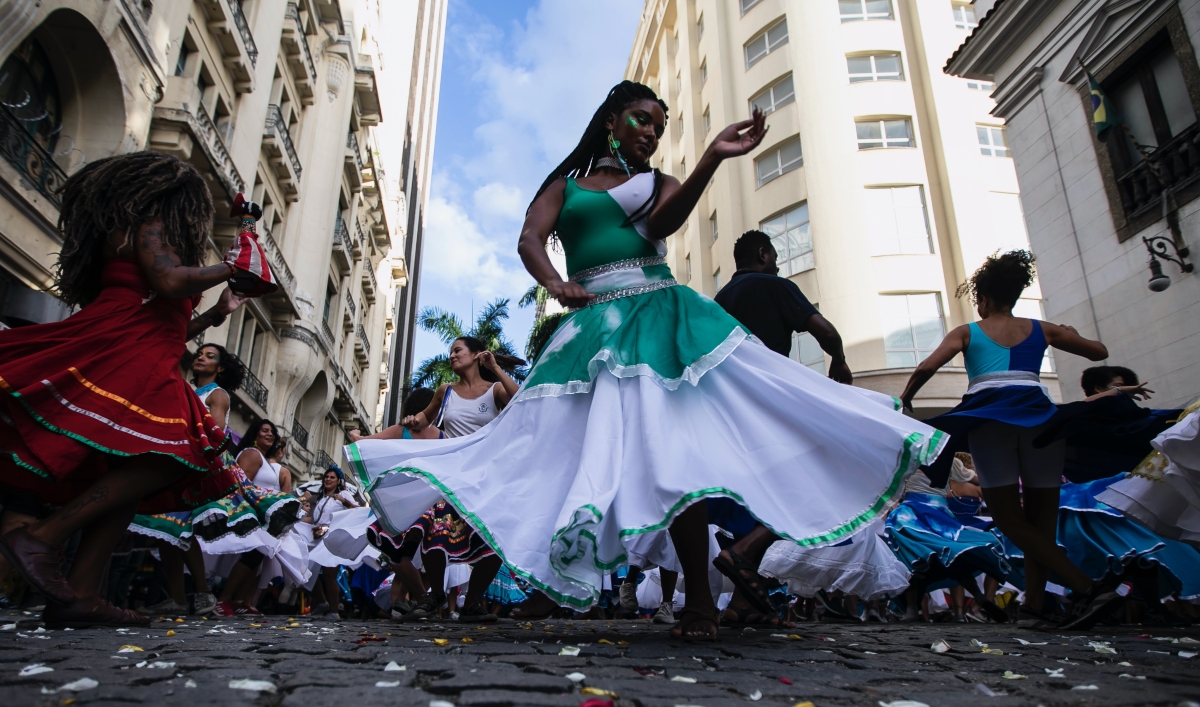 The sprawling complex of barracks is where Carnival workers spend much of the year stitching sequined costumes for samba schools — cultural groups based in communities around Rio.

Inside one of the barracks, members of the Salgueiro samba school rushed to put the finishing touches on a towering parade float. It’s decorated with giant figures of Black dancers frozen in elegant pirouette poses and wearing tutus with African patterns. The display is an homage to Mercedes Baptista, Brazil’s first Black ballerina.

“She was an extremely important figure – she opened the door for many others,” said Alex de Souza, Salgueiro’s creative director. “What we did was transform this history of Black resistance into costumes and parade floats.”

Through glittering costumes, provocative floats and bold song lyrics, several samba schools at this year’s Carnival — the first since the pandemic hit — are paying tribute to the country’s Black history while also lambasting the racism and violence that Black Brazilians continue to face.

Brazil’s Carnival, which began earlier this week and runs through Saturday, is famous around the world for its extravagant parties and dizzying samba beats. Yet, the annual celebration also has a long history of political and social resistance. Samba schools, born in Rio’s low-income neighborhoods — or favelas — have long used the parade to denounce oppression and injustice.

But de Souza said that there is a fresh urgency to speak out against racial injustice as Brazil grapples with its own racial reckoning not unlike the one sweeping through the US.

“The celebration of Black culture has been present in samba schools for a long time. And in 2020, with everything we saw around the world, with the protests, with the global outcry over the death of George Floyd, this reignited a discussion abroad and in Brazil over racism.”

“The celebration of Black culture has been present in samba schools for a long time,” Souza said. “And in 2020, with everything we saw around the world, with the protests, with the global outcry over the death of George Floyd, this reignited a discussion abroad and in Brazil over racism.”

More than half of Brazil’s population is Black, but it still struggles with racial inequality.

For Leonardo Gallo, with the Salgueiro samba school, says it’s a remnant of the country’s painful colonial past. Brazil imported more enslaved Africans than any other country and was the last nation in the Americas to abolish slavery in 1888.

Today, a majority of people in Rio’s impoverished favelas are Black. Residents are routinely gunned down as drug gangs fight each other and the police. Last year, police officers massacred 25 people during a raid in one slum.

Separately, in recent years, there have been several high-profile killings of Black Brazilians that have sparked a national outcry.

In its headline song for Carnival, Salgueiro denounces the rampant violence: “One day, my Black brother cried out for some phony freedom,” the lyrics go. “Today, the cage is the favela. We are trapped by birth, scarred by bullets like a whip.”

Related: Electricity rates have skyrocketed in Brazil. The govt says the water crisis is to blame.

For many in the Salgueiro favela, Carnival represents an escape from this tough reality, explained Gallo, one of the song’s composers. But he also sees samba as a way to battle oppression.

“Samba has always been the voice of the marginalized. Samba teaches me, it encourages me, it liberates me, it shows me the world. Samba defines me — it’s my ancestors, it’s our origins.”

“Samba has always been the voice of the marginalized,” Gallo said. “Samba teaches me, it encourages me, it liberates me, it shows me the world. Samba defines me — it’s my ancestors, it’s our origins.”

Other samba groups, like Beija-Flor, are taking a stand, too. Just a few days before Carnival, hundreds of revelers packed into a bright rehearsal hall in Nilópolis, a distant suburb with a violent reputation. They trickled in, in pairs and groups, clad in royal blue and white — the official colors of Beija-Flor — to see the school’s last rehearsal before the big parade on Saturday.

The mostly Black crowd swayed to the music, embraced and wiped away tears.

Related: Progressive evangelicals in Brazil wage a battle ‘against Bolsonaroism’ ahead of elections

“Raise your fist for equality, uncover what history has hidden,” they chanted in unison. “The whip is gone and the lash is broken, but you still don’t recognize what Black people built.”

Beija-Flor’s message resonated with Matheus Vinicius dos Santos. The 26-year-old who was born in Nilópolis, said that he knows what it’s like to live on the margins.

Dos Santos, who wore an elaborate costume and a string of blue rhinestones draped across his forehead, tapped his foot to the rhythm of tambourines and brass drums. For Carnival this year, he said that he will parade with the school, bringing visibility to the fight for racial justice.

“Samba says so much about Black resistance, about how much Black people have suffered,” he said on the sidelines of the rehearsal. “When a samba school brings this struggle to the stage, it’s seen by so many people.”