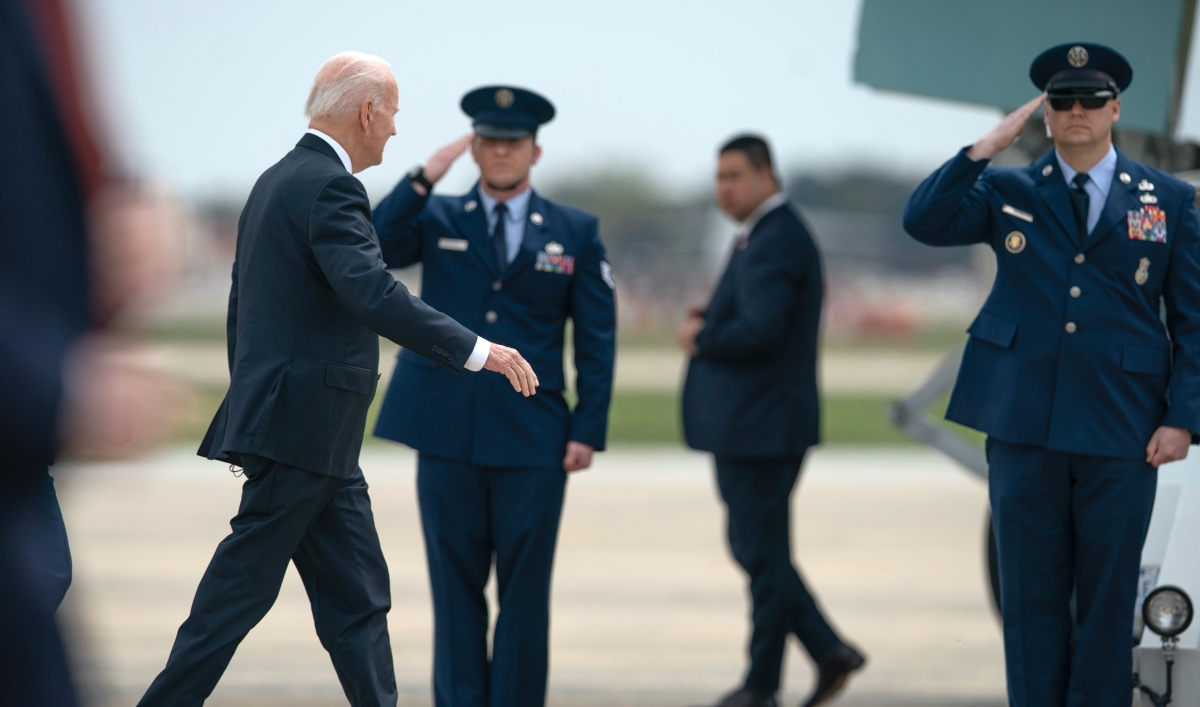 President Joe Biden pledged an additional $1.3 billion Thursday for new weapons and economic assistance to help Ukraine in its strong but increasingly difficult battle against the Russian invasion, and he promised to seek much more from Congress to keep the guns, ammunition and cash flowing.

The latest military aid, Biden said, will be sent “directly to the front lines of freedom.”

“Putin is banking on us losing interest,” Biden said. The Russian president is betting that “Western unity will crack … and once again we’re going to prove him wrong.”

The new package includes $800 million in military aid for much-needed heavy artillery, 144,000 rounds of ammunition and drones for the escalating battle in the Donbas region of eastern Ukraine. It builds on roughly $2.6 billion in military assistance that Biden previously approved.

There’s also a fresh $500 million in direct economic assistance to Ukraine for government salaries, pensions and other programs. That raises the total US economic support to $1 billion since Russia’s invasion began nearly two months ago.

Bill Browder was at one time among the largest investors in Russia. He’s the CEO and co-founder of Hermitage Capital Management and the author of “Freezing Order: A True Story of Money Laundering, Murder, and Surviving Vladimir Putin’s Wrath.” He spoke to The World’s host Marco Werman.

Marco Werman: Are sanctions working or are they having their intended effect?

Bill Browder: Well, sanctions are like medicine, which you apply to a disease. It depends on where you are in the course of disease, how effective they’re going to be. So, if we had used even a portion, a small portion of these sanctions before Putin invaded Ukraine, he might have had a different calculation than he had by us not using them and then applying them long after he invaded Ukraine. And he was convinced that we weren’t going to sanction him seriously because over the last 20 years, when he’s done other terrible atrocities, we’ve done nothing. Now, we have these sanctions in place. At this point, in my opinion, they’re not going to affect his calculus. So, what’s the purpose? In my opinion, the purpose is to deplete him of the resources to fight this war. And that’s a much longer-term thing to judge.

So, let me start with this. Are you saying it’s too late in the game, really, for sanctions to be effective?

I’m saying that we have to do everything we can, but we really blew our chance to do it on a much lower scale before. We could have had a much bigger impact if we had done it earlier. And now, because we’ve done it late, we just have to be complete about it. And if we’re not complete about it, then the war will carry on longer than we would like it to.

So, when we last had you on the program in early March, the US justice Department had launched a task force called KleptoCapture to track down Russia’s elites and prosecute those who violate US sanctions and then seize their assets. It’s been active now for about two months. Are there signs yet of what impact this specific project is having?

Well, I think there’s been some nice photo-ops from this whole story of yachts seized in different parts of the world, which is very satisfying from an emotional perspective. But I know how the Department of Justice works, and the real stuff is going to be happening over the next five years, not over the next few weeks. And that’s going to be very ugly and detailed prosecutions of different oligarchs, and that’s going to send a shot across the bow of all these people. But I wouldn’t think that there’s any major accomplishment other than a few photo opportunities that they’ve gotten under their belt so far.

Five years, that doesn’t sound like it’s going to have much of an impact on the war right now.

I don’t think it will. The things that will have an impact on the war are weapons for Ukrainians and broad sanctions against all the oligarchs, not just a few of them.

So, the latest round of sanctions announced this week, they’re going after Russians and Russian entities helping avoid sanctions, it sounds like the US is going after basically different heads of the same Hydra. How can we be complete about cutting off Russia’s cash flows?

Well, you know, as you say, it’s like cutting off the head of the Hydra. Another one grows back or another analogy is Whac-A-Mole. You know you, you have to keep on whacking. The Russians are very adept at obfuscation and hiding and all sorts of other ways of avoiding these types of legal challenges. And so, we have to be nimble and also, of course, correcting ourselves. And so, this is good. This is what should be done, is sanction the people, then sanction their family members and sanction their trustees and then sanction the people doing business with them. And so basically, it becomes a totally inhospitable place for them to do anything.

What else could the US or Europe be doing? What would be more effective right now?

By not sanctioning Russian energy, as you said, the elephant in the room, aren’t all Western countries in a way enabling Putin?

In your book, “Freezing Order,” you speak of the lengths Putin has gone to to try and silence you for going after his money flows out of Russia. It’s clear he doesn’t want these flows uncovered, and it seems he’s been successful. What do you think we don’t fully realize about Putin’s wealth?

Well, the other thing that’s going on is that in order for him to achieve this level of secrecy and money laundering and exporting all of his dirty money to safety in the West, he’s had to employ a large group of what I call Western enablers. And so, we look at Putin and we say he’s a bad guy, and I don’t think anyone argues with that now. But we have a lot of people who are working in big law firms, big lobbying firms, private investigation agencies, PR firms that are basically working on behalf of the Russian security services in the United States and Great Britain and all sorts of other places. You know, these are people who are actively involved in laundering money, laundering reputations, et cetera. And these are the same people whose wives are at the Human Rights Watch dinner raising money. I mean, it’s just absurd that we have these Westerners working for the Russian government in America as we speak, and nobody is really sort of focused on that. And these people don’t seem to be ashamed of doing it.

And why don’t we know more about that?

Because we haven’t ostracized them. We haven’t said this is wrong. This is terrible, it’s immoral. And in fact, we haven’t made it illegal and it should be. We should not have people working for the Russian security services, taking money to do their dirty work in America — it just shouldn’t be allowed.

There’s sort of three scenarios, one good one and two bad ones. The good scenario is that the Ukrainians continue to perform well in these military confrontations. We give them more and more military equipment. We do more and more economic strangulation of Putin. And he loses the war; if he loses the war, the Russian people will no longer have him. They’ll get rid of him on their own. That’s the best scenario. I give it a 15% probability. The most likely scenario is it continues to go on and on. There’s no clear winner. No clear loser. More and more heartbreak and death and destruction and horribleness on and on and on — 70% scenario. And then the real nightmare scenario is somehow he wins in Ukraine. Maybe he sets off a nuclear bomb in a town in Ukraine and then everybody gives up. In which case, then he’ll be at the Estonian border or the Polish border with his guns pointed at NATO, his nukes, pointed at London, New York and Berlin, and asking us whether we want to go to war with him and seeing whether we blink.

That is the worst scenario, which is why we have to invest everything we have in the first scenario.

This interview has been lightly edited and condensed for clarity. The Associated Press contributed to this report.